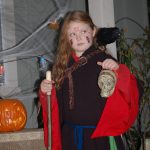 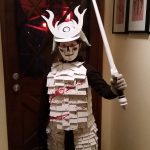 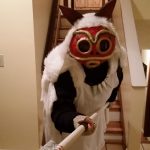 From Bucoda to Boocoda: This town is serious about Halloween.

Pop over to western Washington for casket races, a procession of hearses complete with a brass band and a workshop on how to write your own obituary and tombstone. The citizens of Bucoda transform their town for the month of October

Halloween Science! What happens when a Jack ‘o lantern eats too much candy.

Best demo I ever did for elementary school was this Vomiting Jack o Lantern. And this IS something you can do at home. Get your pens and pencils, it’s time to make a grocery list:

Next you need a Pumpkin, carve the face(chop off the bottom not the top). and get ready!

Bubbles of oxygen come out of the hydrogen peroxide. We are going to catch them.

You mix your yeast with the warm water and let it proof. In a container that fits inside the pumpkin, you put hydrogen peroxide, dish soap and food coloring. Add yeast, set down pumpkin and let the reaction happen.

Bubble of oxygen come out of the hydrogen peroxide. We are going to catch them.

You mix your yeast with the warm water and let it proof. In a container that fits inside the pumpkin (chop off bottom not top) you put hydrogen peroxide, dish soap and food coloring. Add yeast, set down pumpkin and let the reaction happen.

While we’re here, Lets talk about the history of the Jack ‘o Lantern:

That’s right, a turnip. Or a potato. Or in England a beet. It was only when Irish and Scottish settlers came to what would become the US did they find that Pumpkins made great jack-o-lanterns!

In 2017 the top costume for children was a superhero. For Adults, a witch, for pets, a pumpkin. And while the most popular costumes for people change, I looked at data back to 2013 and pets are firmly stuck wearing that pumpkin outfit. 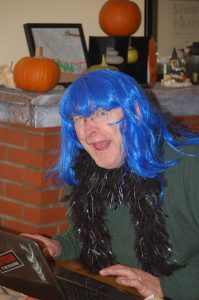 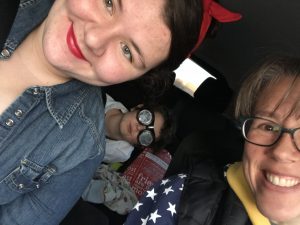 2016: Sock Hop Allie, Grim Reaper Will, Prom Queen Amy. I’ve been eating more cookies this year, so Prom Queen isn’t in the cards. But I enjoyed the cookies so it’s ok. 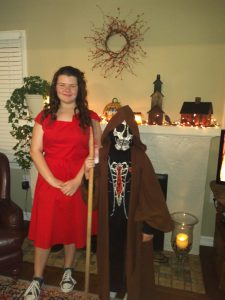 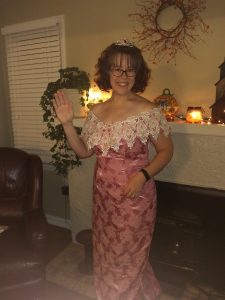 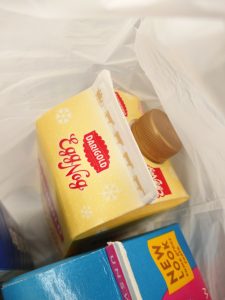 Our black cat, Keith, is great. And I am not a witch. Mostly.

The association of black cats and spookiness actually dates all the way back to the Middle Ages, when these dark kitties were considered a symbol of the Devil. It didn’t help the felines’ reputations when, centuries later, accused witches were often found to have cats, especially black ones, as companions. People started believing that the cats were a witch’s “familiar”—animals that gave them an assist with their dark magic—and the two have been linked ever since.

Medieval France and Spain, black cats were considered bringers of bad luck and curses to any human they came near, and were associated with witchcraft.

Many Medieval Germans believed themselves to be cursed if a black cat crossed their path from left to right.

Black cats, however, have also served as symbols of good luck in numerous cultures.

In the British Islands, black cats are often believed to bring affluence to any house they occupied.

In Japan, they are also considered to bring good luck.

In Ancient Egypt, black cats were worshipped as sacred.

The Puritan Pilgrims distrusted anything associated with witches and sorcery, including black cats.They actively persecuted black cats – it became a practice to burn black cats on Shrove Tuesday to protect the home from fire.

Black cats were high up on that list. Legend had it that witches could transform into a black cat and back, emphasizing superstitions of these furry creatures. Some people even believed that witches could re-incarnate into black cats after death. Additionally, there was the Middle Age legend that the devil often gifted black cats to witches to act as their servants. Historically, this creature was known as an “animal familiar.”

The naturally standoffish, stealthy attitude of cats probably didn’t help these felines, either. Paired with their dark fur coats and glowing eyes, black cats were feared as much as the human witches themselves. And as literature about witchcraft became more widespread, a period of “witchcraft hysteria” reigned between 1560 and 1660 in Europe and the New England colonies.

In the U.S., Halloween Eve goes by many names, with variation even in the areas that do call it something special.

“Mischief Night” has a strong presence in the New Jersey area and the coastal Northeast.

that Mischief Night was the day before May Day, when young people played practical jokes such as switching shop signs, overturning water tubs and trapping people inside their houses.

Or the night before Guy Fawkes “the youths take upon themselves to remove many of the gates belonging to private residents. They seem to glory in the sport, and appear to think they have a perfect right to do so, through custom.”

U.S. newspapers in the 1930s and ’40s, with celebrants apparently hoping to separate the wholesome ritual of dressing up and collecting candy from the custom of causing mayhem.

A 1937 article in the Daily Boston Globe describes children “ringing false alarms, setting fires, breaking windows, and in general doing their best to annoy people” along with a disappeared horse and wagon, leaves dumped on lawns and doorbells rung.

Angels’ Night. The idea was introduced in 1995 by Detroit officials to coordinate the tens of thousands of volunteers who patrolled neighborhoods, helping to reduce the number of fires and eventually bring them to normal levels.