Like many animals, until a child is about 18 months, they don’t understand that the image in the mirror is a reflection.

Magpies are one of the few animals that seems to pass the MSR test. The bird in this vidoe has a yellow sticker placed under it’s beak on the chest. It can only see the sticker in the mirror.

A little more in depth of Dr, GG. Gallup Jr. article and self recognition in chimpanzees:Nature magazine

A number of other hairless, featherless animals:

Platypus: Who Needs a Stomach Anyway?

National Geographic and the loss of the stomach 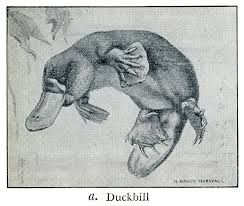 Some places you can go for more info: