Julie d’Aubigny: An Absolute Badass. (Or troublemaker. You decide)

After a few years, She fell for a woman. Two years later, when that woman died, Julie was crushed. Retired from Opera, joined a convent, and died at the age of 33.

They have an amazing story. It’s already been told by the hosts of Stuffed You Missed In History Class-check it out here.

Bell Burnell made the first documented observations of the energetically charged corpses of bygone stars known as pulsars, her contributions to the field are being honored with a $3 million Special Breakthrough Prize in Fundamental Physics.

“Jocelyn Bell Burnell’s discovery of pulsars will always stand as one of the great surprises in the history of astronomy,” says Edward Witten, the chair of the Breakthrough Prize selection committee

Read the whole article. She’s worth your time.

The Way of the Pirates Ching Shih 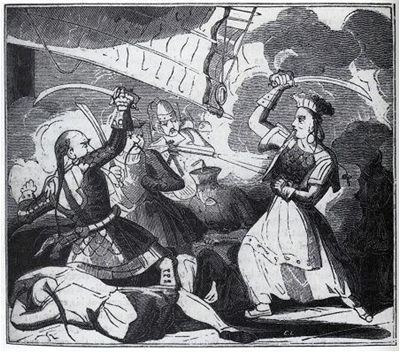 she was Cantonese prostitute who quickly rose through the ranks in the brothel of her birthplace city Guangzhou.

She eventually gained control over a large number of pirate ships and organized them into a well-oiled machine that attracted the attention of the famous Chinese pirate Cheng I.

Married and united their pirate empires.

she managed to forge alliance with many other pirate leaders who followed her and created a naval force that counted over 1500 naval ships and 180 thousand pirates.

Ching Shih’s control over the pirate fleet at that time was absolute,because of her well maintained political maneuvers her insistence that all pirates under her command respect very strict pirate code.

The core rules of Cheng I Sao’s fleet were::

As a ruler of the largest pirate fleet in the human history, Ching Shih even managed to create problems for many governments with largest naval fleets in the world.

After the death of her husband Cheng I in 1807, she took control of the fleet, immediately starting a romantic relationship with Cheng’s adopted son (and lover) Chang Paou.

she started loosing grip of her fleet in 1810 and the pirate alliance broke into six distinct groups, she elected to take the big opportunity that was offered to her by Qing Emperor Jiaqing. She and Chang Paou received full royal pardons.

Ching Shih returned to land and resumed her life as Mistress of a local brothels and organizer of various smuggling and gambling enterprises.