That’s right. Way back in the early 1900s, when women were protesting for the right to vote, there was a four-foot eleven-inch woman teaching the Suffragettes how to defend themselves. Make way for Edith Margaret Garrud. 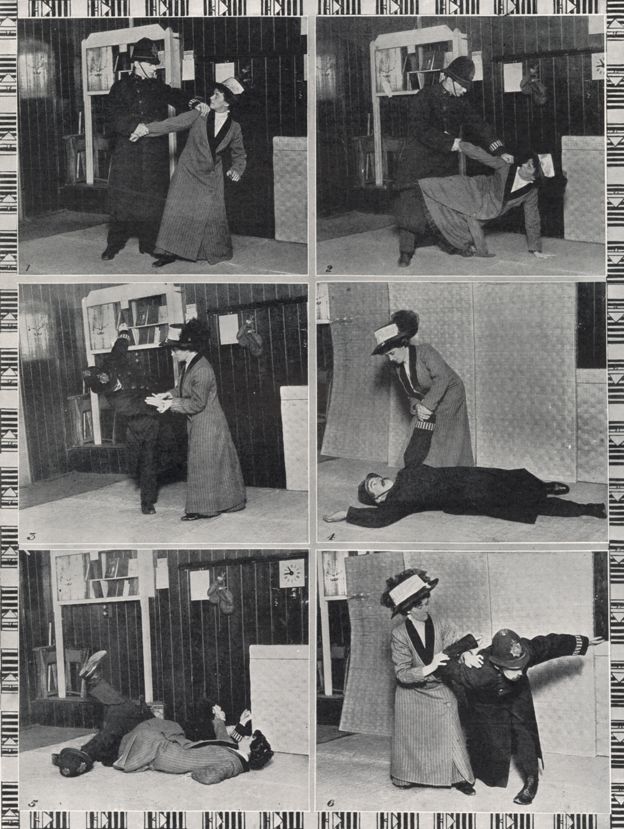 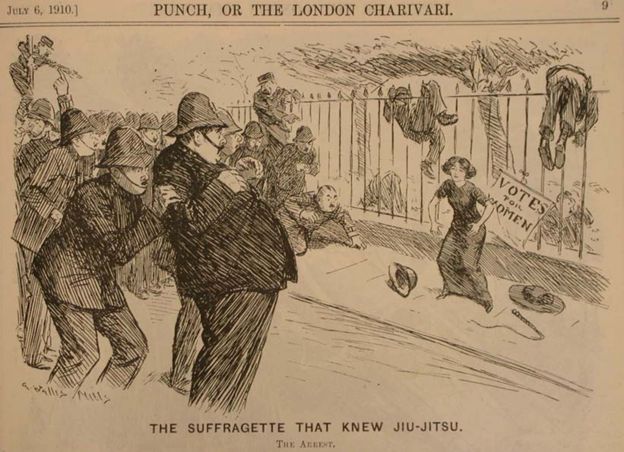 Welcome to Brain Junk. I’m Trace Kerr and I’m Amy Barton and this is a Brain Storm

AB: Jiu Jitsu Suffragettes is what I want to talk about today.

TK: Okay. You mentioned this to me and I typed it into the list of things to talk about and I am very intrigued.

AB: Yes. So first a couple of little background jiu jitsu as a martial art. Are you familiar? Is that one that you’re familiar with?

TK: Vaguely. Okay. Let’s just assume no, I know nothing.

AB: Some of them are straight on. I’m going to try to hit you as much as I can. I’m taking you down. Jujitsu is about neutralizing an enemy with pins, joint locks and throws and they develop around using the attackers energy against themselves. So I imagine there’s a lot of, they’re coming at you, you sidestep and give them a nice shove.
TK: Oh, okay. Kinda like Judo, which Chaz has a lot of experience with and it’s kind of annoying because you come at a person and they just suddenly, yeah, they’re like, you’re moving. I’ll just step aside and you’ll just keep moving. And then you’ll eat pavement.

AB: Yup. And then they chop you on the back of the neck and knock a few teeth out. It’s over. Which is a really good style for someone who is not as strong as their opponent.

AB: And the opponents, um, are the police and the law enforcement of the early 1900s, because let’s go back and talk about suffragettes and Emmeline. Pankhurst. So the suffragettes originated in the early 19 hundreds with the fight to gain the right to vote and some equality and Emmeline Pankhurst was big in that initially and really developed that. So the suffrage movement really began in October of 1903 and grew from there. And it was not a please, sir, can we vote? See, my perspective is the Mary Poppins sister suffragette song. That’s kind of my view. So like ladies wearing banners and hitting cops with parasols, but it really wasn’t like that.

TK: I forgot about that song. You said it and then I could hear them singing.

AB: Ah, you need a minute pause. Go find the song and know that it wasn’t exactly like that. Um, women quickly in the suffragette movement became frustrated at the lack of movement and felt like, we need to do more. We need to do more than passively say, please can we vote? And so it became an active, we’re going to picket and protest. And so then law enforcement responded cause they’re like, well, we’re not into this and you can’t do this here in the public square. So they would arrest them and they would break the rallies up. And in the midst of this, Emmeline Pankhurst was trying to be out there and have her voice heard. But law enforcement’s goal is to not make that happen. And so she eventually developed and gathered around her a body guard of people. And that’s where Edith Garrett comes in. Edith Garret was four 4′ 11″.

AB: She’s a petite little lady. So think Judy Garland Kristin Chenoweth or Sandi Toksvig from the great British baking show. Super tiny people, real little lady. And she met her husband and married William Garrett. And he was a physical culture instructor and he specialized in boxing, gymnastics culture. Is that like the fancy way of saying PE sounds like it. Yeah. Like, and so he was very athletic and it sounds like she was game for that too, because in 1899 both of them were introduced to the art of jujitsu and she joined into, she started learning as well.
TK: Wow.

AB: So she became a good teacher. She would teach the women and the children had her own classes and was proficient. And she eventually ended up also intersecting with the suffragette movement. When Emmeline Pankhurst started the Women’s Social and Political Union, she was advocating for that more physical approach to their work. And so Edith Garrett started training up the women in jujitsu as well. And so that way a 4′ 11″ woman could face an officer and not necessarily be arrested because she could evade and fight back a little bit.

TK: How much do I love everything about that? Because you know, you’ve got early 1900’s the police were probably not following the kind of rules that they’re supposed to be following nowadays. And so I’m imagining these women and they’re protesting and the police are all men and they’re like, what are you doing out here? You’re supposed to be in the kitchen and we want to vote and what are you talking about? And thinking they could physically intimidate these ladies. They could probably pick them up and walk away.

TK: And, and I’m imagining Edith, you know, and she’s got her corset and her dress maybe a bustle and, and yet she’s still kind of kicking ass. And I love that too.

AB: Very much. I look at, Oh there’s Poe pictures posted on the page that are terrific cause it’s pictures of, of the period where they’re demonstrating and they’re delightful because it’s like Mrs. Banks from Mary Poppins is taken down a cop and not that law enforcement is bad, but at that time, that was very adversarial. Beginning in 1908 is when Edith started teaching suffragettes self defense. She had the suffragettes self-defense club prior to World War 1. Things were really ramping up and so they would arrest women and then women would hunger strike and refused to eat. And so in 1913 the cat and mouse act and that allowed the police to release hunger strikers. So the, the suffragettes would be hunger striking and the police would release them because they refuse to eat and they get weaker and weaker and then they would just go recapture them. And so Emmeline Pankhurst had been arrested and released and in an effort to protect her, to keep her out in the public, this bodyguard, and they were called the Amazons, they were nicknamed the Amazons. She had up to 30 women sometimes guarding her at events. They were very not passive. Like some ladies at the knew it was going to get physical and they would put cardboard in their corsets and up in front so that at least if they got punched or kicked or something got physical, they had a little bit of a buffer, but they’re like, we’re not for those shenanigans. They would do things like at speaking engagements Emmeline Pankhurst would dress up as a member of the audience and then suddenly appear on the stage and Voila’, they would have garlands of flowers and things around the side. And they put barbed wire in those, so as the police are kind of leaning against in the back, um, and they’re like, get her, that’s her. They would get stuck on the barbed wire and they were very proactive tried lots of things. And so she managed to get into a speaking arena as a guest and up onto the stage and spoke for a minute and a half before officers could act and, uh, try to arrest her again.

TK: Wow. Why don’t we talk about this in school?

AB: I know. Yeah. So it was about 30 suffragettes and 50 police officers involved in a brawl in front of 4,000 people for several minutes and they held their own several minutes.  These ladies in their tight corset dresses are still holding their own against the police for awhile.

AB: They did eventually overwhelm the bodyguard and Pankhurst was arrested again, but it took a significant effort to drag her away, which just showed how effective the bodyguards had become.

AB: I have hope. I have a friend who teaches social studies in Central Valley School District and she is moving to a more online curriculum, high five Leslie. And there are so much more choice than with a standard print book. You have so much more flexibility in your curriculum. I think there’s good intention out there, male, female, across the divide of people. I think there’s good intention to teach more well rounded history. But this textbook is a 100 bucks and you know, yeah.

TK: And you have to find it. I mean, constantly doing this, doing this research. You come across things all the time.

AB: Yeah. I do find this Jodie Ruster found this. Thanks Jodie.

TK: Oh my gosh. This is why we love Brain Storms.

TK: Whoa. That crazy. That is crazy.

AB: Yeah. They continued to work in self defense in jujitsu until about 1925 and then they retired from public life and I don’t know what, for the next 50 years lived quietly.
TK: Yes. And maybe that would be a good thing. She’s earned it. Wow.

AB: And that’s my Brain Storm.

TK: We are on Facebook and Instagram as BrainJunkPodcast and you can find us on Twitter as @MyBrainJunk. If you have any interesting facts or thoughts that you’d like us to talk about on the show, hit us up on one of those places and maybe you’ll hear it on the podcast. I, Amy and I will catch you next time when we share more of everything you never knew you wanted to know. And I guarantee you will not be bored.