How do events get into the Olympics to begin with?

Ski ballet involved a choreographed routine of flips, rolls, leg crossings, jumps, and spins performed on a smooth slope. After the mid-1970s the routine was performed to music for 90 seconds.

Was a Demonstration Sport: Not an official Olympic sport

The origins of skijoring can be traced to 1850s Scandinavia, when residents drawn to the various gold rushes in the western United States returned home and introduced Native American dog sledding traditions they had witnessed to local conditions.

One dog more practical to raise than a team, if pulling a sled then having the driver ski behind was easier on the animal.

Saint Moritz Switzerland the horse is riderless so skier is also guiding the horse.

Either way horse has to be specially trained to pull a skier.

Said to have originated as a method of winter travel.

No reigns or signaling devices, dogs must be motivated to run and willing to obey skier.

Races are often held in conjunction with sled dog racing.

Tug of war was contested as a team event in the Summer Olympics at every Olympiad from 1900 to 1920. Originally the competition was entered by groups called clubs. A country could enter more than one club in the competition, making it possible for one country to earn multiple medals. This happened in 1904, when the United States won all three medals, and in 1908 when the podium was occupied by three British teams

organizers of the sport say the swimmer is actually in sync with the music. 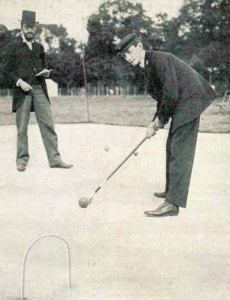 Some of the sports we are talking about were DEMONSTRATION SPORTS. Normally used to promote a local sport from the host country. Now they are more likely to be used to to gauge interest in a new sport. Not introduced officially until 1912.

Possible competition for distance and accuracy. 17 events all for men. Only french competitors.