Episode 32: Everything About Nostalgia Trip

Episode 32: Everything About Nostalgia Trip

Getting a lollipop at the doctor’s office early 1970s

Disclosing Tablets: Tabs that turned your teeth bright pink where there was plaque.

Actually, it was the sound of your modem trying to talk to another modem across the phone lines. Give it a listen. Ahhh. sounds like high school.

Measuring and modeling the information revolution. 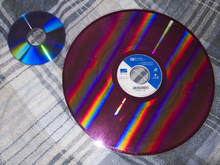 Initially licensed, sold and marketed as MCA DiscoVision in the United States in 1978.

By the early 2000s, LaserDisc was completely replaced by DVD in the North American retail marketplace

The format has retained some popularity among American collectors, and to a greater degree in Japan, where the format was better supported and more prevalent during its life

The first Betamax device introduced in the United States was the LV-1901 console, which included a 19-inch (48 cm) color monitor, and appeared in stores in early November 1975.

Betamax is obsolete, having lost the videotape format war[2]

Production of Betamax recorders ceased in 2002; new Betamax cassettes were available until March 2016, when Sony stopped making and selling them.[3]

A carburetor (American English) or carburettor (British English) is a device that mixes air and fuel for internal combustion engines in the proper ratio for combustion.

When the engine is cold, fuel vaporizes less readily and tends to condense on the walls of the intake manifold, starving the cylinders of fuel and making the engine difficult to start; thus, a richer mixture (more fuel to air) is required to start and run the engine until it warms up. A richer mixture is also easier to ignite.

In older carbureted cars, the choke was controlled manually by a Bowden cable and pull-knob on the dashboard.

They are still common on small engines for lawn mowers, rototillers and other equipment.

In the U.S. market, the last cars using carburetors were:

TEL is a petro-fuel additive; first being mixed with gasoline (petrol) beginning in the 1920s as a patented octane ratingbooster that allowed engine compression to be raised substantially.

TEL levels in automotive fuel were reduced in the 1970s under the U.S. Clean Air Act in two overlapping programs: to protect catalytic converters, which mandated unleaded gasoline for those vehicles; and to protect public health, which mandated lead reductions in annual phases (the “lead phasedown”). When present in fuel, TEL is also the main cause of spark plug fouling.[5] TEL is still used as an additive in some grades of aviation gasoline, and in some developing countries.

Dennis Duffy was the last remaining beeper salesman in New York City and was known as the “Beeper King“.

1949 that the very first telephone pager was patented. The inventor’s name was Al Gross, and his pagers were first used in New York City’s Jewish Hospital.

In fact, the FCC did not approve the pager for public use until 1958. The technology was for many years reserved strictly for critical communications between emergency responders like police officers, firefighters, and medical professionals.

There were 3.2 million pager users worldwide at the beginning of the 1980s.

By 1994, there were over 61 million in use, and pagers became popular for personal communications as well

While Motorola stopped producing pagers in 2001, they are still being manufactured. Spok is one company that provides a variety of paging services, including one-way, two-way, and encrypted.

A cell phone is only as good as the cellular or Wi-Fi network off of which it operates, so even the best networks still have dead zones and poor in-building coverage.

Pagers can do one way/two way encrypted, also instantly deliver messages to multiple people at the exact same time—no lags in delivery, which is critical when minutes, even seconds, count in an emergency.

So until cellular networks become just as reliable, the little “beeper” that hangs from a belt remains the best form of communication for those working in the critical communications fields.
Other stuff we don’t have time for but I love:
Rotary Phones
AOL
Floppy discs
Reel to reel
8 tracks
Microfiche