Hurry Hurry Hurry, step right up and witness the incomparable healing powers of this elixir! Why, it cured me of my gout and set my mother on the road to healthfulness. Two sips in the morning and you too will have a bright shine to your eyes and a bloom on your cheeks! 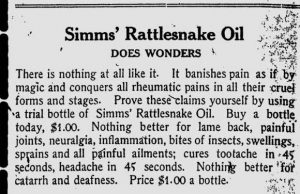 Snake Oil: A substance with no real medicinal value sold as a remedy for all diseases.

Quackery: Dishonest practices and claims to have special knowledge in some field, typically medicine.

Origin of the term snake oil 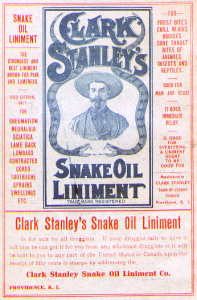 The rattlesnake was used to heighten danger and excitement during pitches

His wife played a role in his traveling show, donning an outfit made of rattlesnake skin from head-to-toe, as seen in this rare postcard from Dr. Nickell’s collection:

Public outrage over hucksters, medical quackery and the like led to the Pure Food and Drug Act in 1907

A footnote to Clark Stanley;s Snake oil Liniment. A shipment was seized by the US gov in 1917 and tested. It contained mineral oil, red pepper (which heats the skin) traces of turpentine or camphor and 1% of fatty oil but probably from cattle, not snakes.

He was fined $20 ($429 in today’s dollars) for mis-branding his product by falsely and fraudulently representing it as a remedy for all pain. 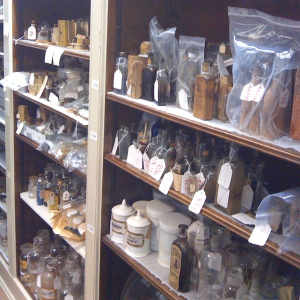 What was actually in some of these medicines? Smithsonian magazine article on Snake Oil

The Great American Fraud: Quacks and quackery in medicine 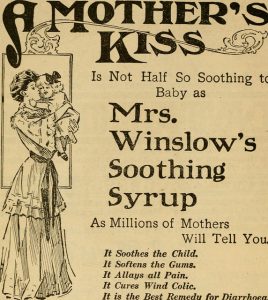 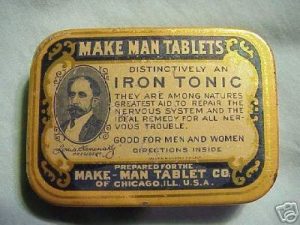 and his administration to pass two important pieces of legislation: The Meat Inspection Act and the Pure Food and Drug Act of 1906.

The Act would later evolve into the modern day Food and Drug Administration in 1930, but at the time it only applied to food and drugs moving in interstate commerce.

the “Progressive Era”—that saw a push towards more protections for consumers against unfair business practices.

What makes it work?

It was claimed to alter the body’s energy, relieving pain, and the maker cited a study showing that wearers had less pain.

Busted. The FTC said in 2011 that nearly $12 million would be refunded to people who bought bracelets between 2000 and 2003. It added that in the study, a placebo bracelet relieved pain as well as Q-Ray. The website now calls Q-Rays “wellness bracelets.”

This blend of nutrients was claimed to aid speech development in children “as soon as the first week.”

Busted. In August, a division of the Better Business Bureau recommended that Speak’s maker, NourishLife, stop certain ad claims. The action came at the urging of Truth in Advertising, a consumer-watchdog group. NourishLife has removed some claims and testimonials from its website.

The maker claimed these apps treated acne with colored lights from smart phones or other mobile devices.

Busted. The FTC announced in 2011 that the apps’ makers agreed to a settlement barring them from making acne-treatment claims without competent and reliable scientific evidence.