Absorbing oxygen through their “skin” and pumping blood with their guts, the Giant Sea Spider isn’t a true spider, but it’s close. Too close for Trace. 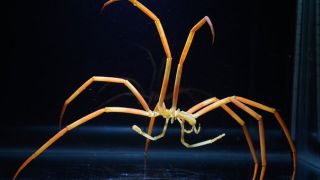 Welcome to brain junk. I’m trace Kerr and I’m Amy Barton. And this is a brainstorm.

AB: I am super excited to talk to you about this subject. It is giant sea spiders.

TK: Imagine Danny Devito cut in half floating in the ocean. That’s also equally horrifying.
AB: This podcast has taken a turn and we are in my first point already. So giant sea spiders, they live in the deep, deep, cold, cold. And scientists are curious about how, how do they get so big and the process, how do they stay alive? So scientists from the University of Hawaii at, I’m gonna say Minoa, a doctoral student of zoology. Kaitlin Shishido did some studies to see how does this happen. So what they did was they, let’s ramble. Okay. Back to my notes.

TK: How do we have an underwater spider?

AB: That part I didn’t look up. You know, I’m only interested in the one thing.

TK: I know. The way they breathe that bothers me.

AB: Oh, actually this is, that’s totally what this is all about. Then you, okay. Derailed me.

TK: I’m sorry.
AB: What was eventually found was that the way that they can grow so huge is that their exoskeletons become holey like Swiss cheese. As they grow, they get more and more holey, which means they can take in more and more oxygen. Oh, so they did some studies and then the idea known as oxygen temperature hypothesis suggests that animals living in extremely cold waters can grow to extraordinary sizes because they have slow metabolisms. The water can hold more oxygen than warm water can. So there’s lots of water, lots of oxygen available. It’s a lot of work for your body to capture oxygen and bring it into cells. It’s a big process. Okay. And so the bigger we get, the harder it is for our bodies. But that doesn’t seem to be the case with these guys. They don’t have that problem. And one of the reasons is that cold water, they need less oxygen.
They get more because the water is more heavily oxygenated and so you can grow more in the cold water. So the researchers went to McMurdo Station in Antarctica to study spiders.

AB: Yeah. They had to go to Alaska to find the Alaska spiders. Trace is looking them up.

TK: Totally. So, and what are they called again?

TK: Oh, I hate everything about this. Okay, keep going. Sorry.

AB: So we’re at McMurdo station. Yep. They’re getting themselves some spiders and they went ahead and put them in spider bootcamp. And this is going to horrify you even more because what they did to test the relative health of the spiders versus… Trace is doing it looks like the potty dance. But it’s a, it looks like the alien, like it’s going to attach itself to your face.
TK: Exactly. But it’s kind of skinny or like an anemic it. Oh, okay. I’m done looking, keep going.

AB: Ah, so spider bootcamp, what they did was they would flip them over onto their back and then time, how fast could they right themselves. And they did with this with multiple things and they would put them increasingly warm water, more and more warm. That was terrible sentence. Um, the researchers flip the spiders upside down and counted the number of times that they could right themselves in varying temperatures. And I’m moving things on the table. Temperatures ranging from 28.7 degrees up to 48.2 degrees. So not blazingly warm. We’d be wildly uncomfortable in this water, but that’s a big temperature differential.

AB: And the sea spiders kept up with the little spiders and the little animals, they kept flipping and no problem. And so it did not affect them a lot to be in that warmer water.
They did great. And so kind of the takeaway is that these guys, because of that porous skeleton where they can really efficiently get that oxygen, they probably could not grow to that size in warmer water. But once they have grown to that size, if they decided they want to relocate set up in the relative tropics, they’d be okay. They’d do just fine because of their Swiss cheese exoskeleton.

TK: So what you’re saying is with climate change, they’re good. They’re going to be fine. We might see them like in places where we would not normally see them and then I could never go to the beach again. Like western Washington.

AB: Oh my gosh, that’s a long, long trek from McMurdo though. I feel like that is prohibitive to them moving to the, you know, the Oregon coast and stuff. Cause that’s cold water. I mean not as cold as it is way, you know, 48.2 in the winter, you think pretty cold themselves on the beach.

TK: Okay. Ah Yay.
AB: That’s all I have to say. And I feel like trace is ready to be done with this too. So that’s my Brain Storm.

TK: We’re on Facebook and Instagram as brain junk podcast. I will not be posting a picture of the spider, but I cannot guarantee that Amy won’t. You can find us on Twitter as @mybrainjunk. Amy and I will catch you next time when we share more of everything you never knew you wanted to know. And I guarantee you will not be bored. Creeped out a little bit, but not bored.

AB: I’m going to go get some sea spiders and Photoshop them with Danny Devito. It’s going to be good.